By now, you’ve likely seen the movie, Boyhood, the award-winning film that captures a boy’s evolution from age 6 to 18. Brutally honest and exquisitely filmed, I’m intrigued by Mason’s transitions from one stage of development to the next, but not as much as that of his mother’s. Her milestones are less predictable, more clearly defined by choice and circumstance, a

nd as she ages, endings appear to be more predominant than beginnings.

The end feels unbearable as Mason packs up for college. She laments through her tears, My life is just going to go like that…the milestones…getting married, having kids, the time we thought you were dyslexic, getting divorced, teaching you to ride a bike, getting my masters, getting divorced again, sending Samantha off to college. And then comes the roaring crescendo, You know what’s next. It’s my f***ing funeral!

I laugh through my tears as Mason retorts, Aren’t you jumping ahead by about 40 years or something? Mason, despite his youthful wisdom, can’t feel the depth of his mother’s loss. He’s at the beginning, alive with possibilities. Death is all she sees.

I know this feeling well and so do my clients. Endings leave us hopeless, uncertain, and confused. We have no sense of the future. We only see the void. The ending doesn’t have to be a specific, external change such as death, divorce, or a child leaving the nest. It could be letting go of a hope or dream, or relinquishing a well-worn identity. 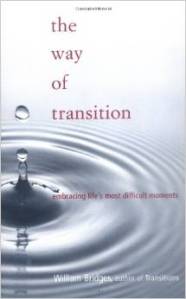 In the film, Mason’s mom isn’t merely saying goodbye to her child. Certainly, that’s hard enough. But at a deeper level, she’s relinquishing a way of life and her primary role as mother. William Bridges, author of The Way of Transition, describes this shift as a “developmental transition”, an inner unfolding of those aspects of ourselves that are built right into who we are and how we are made. Developmental transitions most often occur when we move from one stage of life to the next (adolescence, mid-life), but they also arise when the life we are living no longer makes sense or doesn’t fulfill us anymore.

No matter the catalyst, external change or internal rumblings, transitions have the power to transform us, that is, if we live for a time in limbo instead of latching onto someone or something to avoid feeling disoriented, fearful, frustrated, lonely, or lost. Bridges dissuades us, as do I, from creating a “replacement reality” before we’ve experienced the “neutral zone,” a confusing state in which we feel as though our life has broken apart or gone dead; a period where nothing feels solid and everything feels up for grabs. Sure, it’s an uncomfortable place of uncertainty, but I know without a doubt, it’s a place where beginnings take root.

I know because I’ve been “there” many times throughout my life, and despite my impatience, I’ve lingered awhile rather than latching on. My most significant transition occurred when I was 41-years old. An internal rumbling was driving me mad. I hated my job in corporate and no longer liked where I lived. But despite my unhappiness, I knew that changing jobs or moving wasn’t the answer — not yet. My soul needed a change. So I waited. I watched for signs. I prayed and listened to my intuition. Then one day, after a year in limbo, I picked up a book titled Gutsy Women: Travel Tips & Wisdom for the Road. From that day forward, my life would never be the same.

A new chapter was about to begin. It was titled, “World Traveler.” Now I had a purpose that needed fulfilling. Now the time was right to quit my job and sell my condo. Of course I saw my therapist before I made major changes. I wanted her assurance that I wasn’t going crazy, but deep down inside I knew what she’d say. GO!

On May 14, 1998, I left the life I’d been living behind and ventured into a brand new reality, traveling to 19 countries in 4 months with only a backpack and a good pair of walking shoes. The memories still fill my soul. I was transformed by my experience in ways I never could have imagined. Not only was I brought back to life, I was empowered to write the next chapter of my life once returning home. That chapter was titled, “Entrepreneur.”

My experience of saying goodbye was unlike Mason’s mom; it was much more like Mason’s. Minutes before I was ready to leave for the airport, my mother called me into the kitchen. There was something in her hand, but I couldn’t see what it was. She pulled me close and draped a St. Christopher medal around my neck. Her voice cracked as she spoke these words, “A memento of your father to keep you safe.” When she broke from our embrace, the light caught her eyes. She was fighting back tears. I’m sure the dam broke as soon as I walked out the door. Thankfully, I left something behind to comfort her in her sadness–my dog, Brandie. Surprisingly, my mother offered to take care of her despite never having a dog of her own. Title Mom’s new chapter, “Dog Sitter.”

A mother’s role will change throughout her life, but her significance will never fade. On Mother’s Day 2015, let’s acknowledge all the milestones our mothers helped us achieve, but in addition, let’s encourage our moms to create new milestones solely for themselves. After all, they’ve earned it!