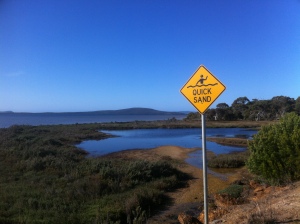 A few months ago I felt incredibly stuck, itching for a new beginning, longing for a major change. Several of my friends were achieving lofty goals – relocating to a new town, purchasing a new home, starting a promising new relationship. Their achievements occurred within a matter of weeks of each other’s. But me, NADDA! I felt like I was stuck in quicksand, my life going nowhere fast.

If only I could make something happen right now, my action-oriented self pined. Next thing I knew I was obsessing about my future, frantically setting goals and searching for a quick fix. A part of me realized that driving hard wasn’t the answer, but another part just couldn’t help it. I felt like my friends were leaving me behind. I was happy for them, but I was also jealous, bored and frustrated by the routine of my life. I wanted an exciting new beginning. After all, new beginnings are intoxicating. Literally, they are!

Our brains are wired to seek out novelty. New objects or experiences increase our levels of dopamine, which controls the brain’s reward and pleasure center. New cities, new jobs, new relationships, even new clothes or gadgets produce this feel-good hormone. In addition, research has determined that dopamine pathways light up when we take action to achieve our goals. Dopamine contributes to motivation. Hmm! Could this explain my achievement-oriented drive?

Throughout my entire life, I’ve prided myself on setting lofty goals and achieving results quickly. Patience has never been a virtue, especially when I’m feeling stuck. But despite my restlessness, I’m not in a position to make a dopamine-fueled-get-it-done-now kind of change. But coming to terms with this. Never been my style! 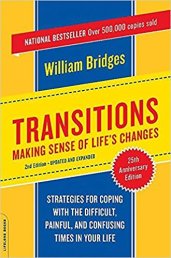 According to William Bridges, author of the book Transitions, Making Sense of Life’s Changes, change is a situational shift – moving to a new home, getting a new job, having a child, losing a loved one – the sort of changes my friends are making now. But transition is the way we come to terms with change — the process of letting go of the way things used to be and then taking hold of the way they subsequently become.

We experience numerous transitions throughout our lifetimes, but there are two pivotal transition points that challenge us the most:

The first is the turning point symbolized by the phrase “walking on your own two feet” – that is, the transition from dependency to separateness and independence – a shift that typically occurring around age 30. No longer naïve, we’ve learned that things don’t always go our way and that life includes disappointments. It’s a time for reflection and redefining our choices, including our lifestyles, relationships and career paths, and for becoming responsible, mature adults.

The second turning point occurs in the late afternoon of our lives. Letting go becomes the prerequisite during this transformational stage, but we’re not just letting go of the things, people and places that shaped our exterior lives. It’s much deeper than that, writes Bridges. It’s a period of unlearning our way of mastering the world, of letting go of a particular kind of self-image and style of coping….of dismantling a whole life structure.

Thankfully, I pulled Bridges’ book off my shelf when I started writing this post. I found a quote to remind me of what I need to “achieve” as I enter the late afternoon of my life.

What we call the beginning is often the end. And to make an end is to make a beginning. The end is where we start from.  -–T.S. Eliot

In time, new beginnings will find me in a whole new way — a slower, more patient way — in a new home, in a new town, enjoying the company of new relationships. But for now, it’s time to unlearn my style of mastering the world, transitioning from fast to slow, and from driven to deliberate, just as I’d do if I were climbing out of quicksand. For if you didn’t know it, the faster you move when you’re stuck in quicksand, the deeper you sink.