Ahmed, the owner of Désert sans frontière, had agreed to guide me through the Southern Oasis route of Morocco. I was delighted to hand over the reigns to him after three days of traveling alone. The maze, the mayhem, and the men in Marrakech put me on guard, but now it seemed I could relax. After all, the owner of my guesthouse, Riad Attajmil, recommended Ahmed, a certified guide and excellent driver who grew up in a Berber village. We agreed to travel together for two-and-a-half-days before he’d drop me at a desert camp on the edge of the Sahara. 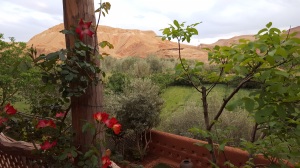 That was the plan, but by end of the second day, Ahmed suggested that the plan change. I don’t need to leave tonight. I want to make sure you’re safe, he proclaimed, as we pulled away from Chez Mimi in Dadès Gorge, the most romantic place I’ve ever been.

Hmmm! I felt my walls go up. Maybe I should stick to the plan? After all, Ahmed was smitten with me. I didn’t know if I could trust him, but on the other hand, I was anxious about fending for myself in the Sahara. (You know, there are snakes and tarantulas in the desert.) And, after all, he wasn’t going to charge me for the extra night, but instead, offer his services to the camp in exchange for room and board.

Go it alone in the desert or risk uncharted terrain with a man? I had fought this battle my entire life, fearing that if I’d let down my guard with another, especially a man, I’d end up hurt or disappointed. But something was very different with Ahmed. A deep connection was emerging between us despite our many differences. It didn’t matter that we were born and raised in vastly different cultures. Our connection was based on authenticity, mutual respect, and value for each others world.

It made no sense to turn him away, and thankfully I didn’t. Something special was about to occur.

(Fast-forward a few hours.) We’re milling around outside Riad Madu, waiting to hit the dunes. I turned to Ahmed who looked perplexed. See that man over there in the Moroccan djellaba, he remarked, the one standing with a woman and child. I know him, but from where? Before I had the chance to help him solve this puzzle, he had stepped away from me and veered in this man’s direction. They spoke softly. I watched intently. They embraced warmly. I smiled from ear-to-ear. Something magical was happening, but what? I couldn’t wait to find out.

After several minutes of chatter between the two of them, Ahmed returned to my side wearing a smile broader than mine. My friend, Saïd and I attended Agadir University at the same time. We both majored in French Literature and attended many classes together. It’s been 17 years since I’ve seen him. Can you believe it? 17 years! After his studies, he left Morocco and took a job teaching in France. He now lives in Amsterdam with his Dutch wife and their daughter, but returns to Morocco for a week vacation every year.

Unbelievable! I thought. If I had stuck to my plan and told Ahmed to leave, Saïd and he wouldn’t have met. They wouldn’t have had the chance to spend hours that night rekindling their friendship, and I wouldn’t have played a part in their reunion.

It was good that they were together that night. It took Ahmed’s attention off of me. That said, it was hard to say goodbye to him the next morning, for I must admit, I was smitten too. But I had a sojourn to continue in Fez and he had a family to return to in Marrakech. But serendipity–it wasn’t ready to leave.

I was sitting at a breakfast table at my guesthouse three days later, enjoying the company of a young woman from Japan. What are your plans today, Mayuko? I asked politely. I’m heading to Chefchaouen, that beautiful blue village in the Rif Mountains, she replied. Me too! I exclaimed. Come to find out, we were both leaving Fez on the 11 am bus with assigned seats next to each other. And, we both had reservations at Casa Perleta, a guesthouse with only 8 guest rooms. Serendipity! I shouted after exchanging itineraries.

What is serendipity? Mayuko asked.

Serendipity is when life hands you an unplanned surprise, an unexpected happy or beneficial event.

We agreed to meet in the courtyard in 30 minutes, hail a cab together, and spend the day tooling around the “Blue Pearl.” It was a wonderful day, a joyful serendipity! 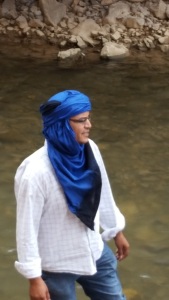 No one knows why and how serendipity happens, but I’m certain that letting go of control is an absolute must. After these two serendipitous events, I felt like something inside me had shifted. I felt freer and less fearful, more trusting and secure.

The dunes of Morocco had opened my mind and a man from the desert had unlocked my heart.